Here’s a traditional Irish Folk Song in plenty of time for St Patrick’s Day! It’s a great song to teach semiquavers (1/16 notes) and it’s traditional to try to sing it faster and faster as the song progresses.

It’s bit of a tongue twister too!  This might seem a tall order for younger ones, but you’ll be surprised that far from being put off, children actually seem drawn to difficult rhythms and tricky words. They might not get it perfectly straight away, but they love to try and enjoy the challenge. 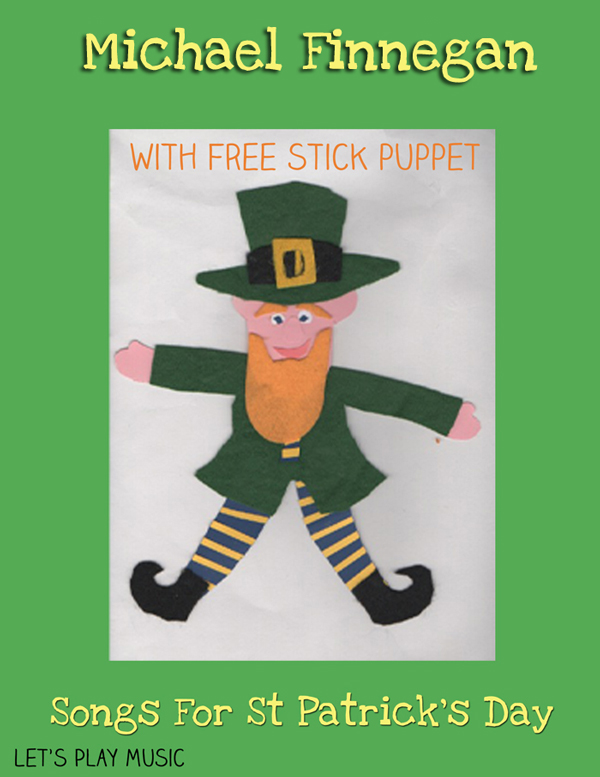 If you’re looking for more ideas for St Patrick’s Day, visit our Leprechaun Songs and  our Celtic Songs for lots more jolly jigs!

There was an old man named Michael Finnegan,

The wind came up and blew them in again

*
There was an old mad named Michael Finnegan,

He fell down and broke his shin-i-gin,

*
There was an old man named Michael Finnegan,

He grew fat and then grew thin again,

Print off the stick puppet printable above and make your own Michael Finnegan. The puppet is double sided, one side with a beard and the other side without.  Younger children will be baffled by his disappearing beard if you quickly flip him over without them seeing. I always pop him up and down from behind the back of a chair, and then they think he’s magic!

Older children will soon suss out the trick, but will really enjoy being ‘in’ on the joke. They can then have a go at making his beard disappear themselves!

Check out our Leprechaun Songs & Celtic Songs for Kids posts for more jolly jigs!  Our St Patrick’s Day Lesson Plan is a 35 minute musical lesson that celebrates the traditions of St Paddy’s Day.